Yemen is bracing for impacts from a small, but currently powerful Tropical Cyclone Chapala (04A) in the Arabian Sea.

Tropical Cyclone Chapala (04A) became the equivalent to that of a Category 4 hurricane in the Atlantic or eastern Pacific Ocean on Friday, local time, but has since weakened to the strength of a Category 3.

This weakening trend will continue the next 24 to 48 as Chapala moved into the Gulf of Aden and eventually makes landfall in central Yemen on Tuesday before eventually dissipating over the interior of the country. 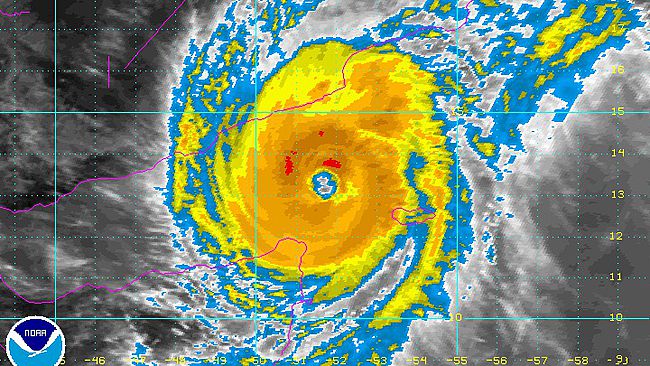 Chapala became the second strongest cyclone on record in the Arabian Sea," AccuWeather Senior Meteorologist Jason Nicholls said. "The pressure of Chapala was 922 mb, close to the lowest pressure of Gonu, 920 mb, in 2007."

Nicholls added that the last cyclone to strike Yemen was Keila in 2011 and was equivalent to only a weak tropical storm.

Chapala is forecast to weaken, prior to making landfall Tuesday morning, local time, but will still be stronger than Keila. 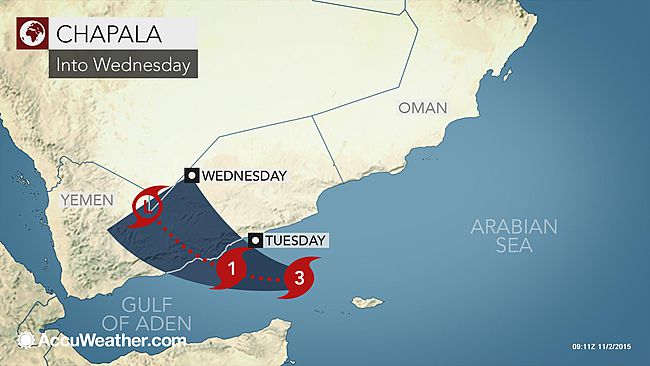 The main threat area from Chapala will be in central and southeastern Yemen where bands of heavy rain and gusty winds began to arrive on Monday. Conditions will worsen into Tuesday as the cyclone approaches the central coast.

The latest forecast takes Chapala inland on Tuesday near Al Mukalla. Damaging wind and flooding rainfall are likely near the point of landfall. Rainfall is expected to be 5-10 inches (125-250 mm), which is more than the region receives in a given year.
Seas will build substantially ahead of Chapala along the coast of Somalia and Yemen. Offshore waves within 160 km (100 miles) of the center will range between 4 and 8 meters (15 and 25 feet).

While Chapala remains a very powerful cyclone now, it will weaken dramatically as it approaches the Yemen coastline.

"A strike on the Arabian coast by a major tropical cyclone is rare due to great amount of dry air that is drawn in from the Arabian Peninsula well ahead of the storm," Sosnowski said.

Chapala could still be a dangerous cyclone equivalent of a Category 1 hurricane as it makes landfall in Yemen. However, the farther west the cyclone goes, the more time there will be for dry air to be pulled into the cyclone causing more significant weakening and less threat for damaging winds. 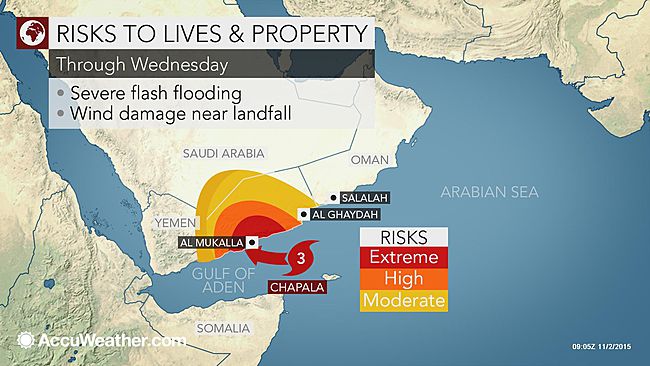 Areas within 50 km (30 miles) of landfall will endure the worst conditions with damaging winds, coastal flooding and torrential downpours.

Locations in Yemen that may be impacted by the damaging hurricane-force winds of Chapala include Balhaf, Al Mukalla and Ash Shihr.

Farther inland and coastal areas away from the core of the storm will be at risk for dangerous flooding; however, damaging winds will be unlikely.

AccuWeather meteorologists will continue to monitor the Indian Basin, following this pattern change, in the coming weeks.