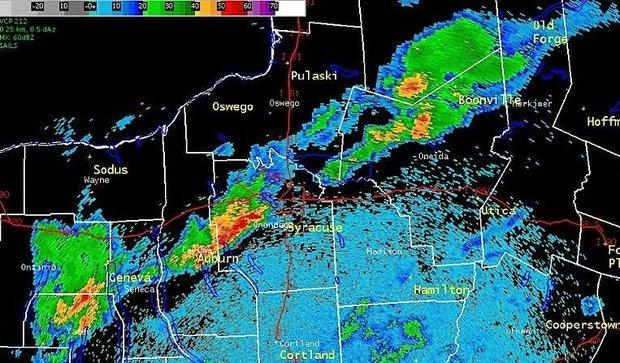 Interstate 81 North, under the Court Street bridge in Syracuse, flooded just before the Court Street exit. Several occupied vehicles were stuck, according to 911. Traffic was backed up, but the highway remained opened.

There also was a report of flooding, with cars stranded on Grand Avenue in Syracuse. A few houses on the same road also had water in their basements.

Dozens of fire departments throughout Central New York responded to water problems, stranded motorists and minor accidents during the storm, but 911 said none of the incidents were life-threatening. Some callers described water approaching or covering appliances in basements.

Fairmount volunteer firefighters responded to Tops Friendly Markets at 9:06 p.m. Sunday after water entered the grocery store on West Genesee Street in Camillus. A Tops employee who answered the phone Sunday night said the store closed early because of flooding in the store. The employee declined to comment further and firefighters could not be reached for comment.

Then, around 10 p.m., the National Weather Service posted the following message on its Facebook page: "The Syracuse metro just had a decent batch of rain go through, with some ongoing urban flooding. Overnight tonight, we will still need to keep a close eye on Northeast PA and Eastern Southern Tier-Western Catskills NY. Most areas have been quite dry and can take this rain (it will even be welcomed by many) but localized heavy rainfall/ponding water/urban flooding will at least be possible."

Shortly before 11 p.m. Sunday, dispatchers at the Onondaga County 911 Center said area fire departments had cleared the majority of the weather-related calls.

The weather service says rain and isolated thunderstorms with torrential downpours will continue through 1 a.m. Monday, but they'll be widespread south and east of Syracuse, to Elmira.