When the sun set over Swan Hill, Australia, on Nov. 6th, at first the sky began to darken as usual. And then ... it exploded. "I witnessed an incredible twilight fireball just as I just arrived home from work at 8:08 pm AEDT (9:08 UT) 7 minutes after local sunset," reports Michael Mattiazzo. "The fireball's magnitude was at least -8, closer to -10, and multiple outbursts were observed before it completely disintegrated." 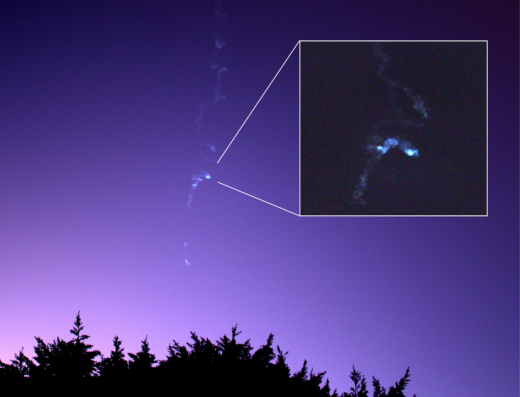 "The sonic boom arrived about 3 minutes later, sounding like the rumble of thunder," he adds. "Local dogs were even barking at the sound. The vapour trail (pictured above) lasted about 25 minutes."

Mattiazzo says the fireball streaked from east to west across the sky. The direction marks it as a likely earthgrazing Taurid fireball.

This week, Earth is passing through a stream of debris from Comet Encke, source of the annual Taurid meteor shower. Gravel-sized meteoroids hitting Earth's upper atmosphere at 65,000 mph are creating a spray of bright meteors from the constellation Taurus.

Taurids are sometimes called "the Halloween fireballs" because they are most often noticed by crowds outdoors after dark on Halloween. In fact, they may be seen on any night from mid-October to mid-November. Typical Taurid meteor rates are no more than a few per hour but, sometimes, as Mattiazzo observed, one fireball is enough.
Bron: spaceweather.com
Terug naar boven
Bericht toevoegen
1 Gebruiker leest nu dit topic, onderverdeeld in 1 gast en 0 leden